Whangarei Kiwi Sanctuary staff are today saddened by the loss of a friend of 16 years – Rainbow the kiwi.

Whangarei Kiwi Sanctuary staff are today saddened by the loss of a friend of 16 years – Rainbow the kiwi.

Rainbow was first found as an adult bird in 1996, and was recently found dead not far from his usual territory, near Purua. He appears to have died from natural causes, probably old age. He was part of the Whangarei Kiwi Sanctuary monitored kiwi population for the intervening 16 years. 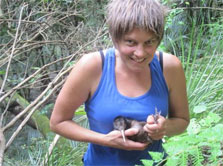 Rainbow contributed many eggs to BNZ Operation Nest Egg and many chicks to the wild Whangarei Kiwi Sanctuary population. He was known to have had at least 30 nests since 1996, and many of these produced two chicks.

“It is always sad to lose such a productive member of the population, but heartening that he survived for so long, and that he was not killed by a dog. It is a positive sign that people in the Purua area where he lived are controlling their dogs and protecting kiwi,” says DOC kiwi ranger Miriam Ritchie.

“Most kiwi have a few burrows within their territories that they use. Rainbow was different in that he had just one burrow that he used when he wasn’t on a nest. We referred to it as his fortress – it was under a huge totara tree and it was impossible to see or reach him when he was in it,” says Ms Ritchie.

Rainbow had a brush with fame; he featured in ‘The Zoo’ television series, and produced the 150th kiwi chick for Auckland Zoo.

He got his name from the reflective tape on his leg band – four colours instead of the usual one or two.

Rainbow was a bit of a Lothario and was known to have at least four different mates during the 16 years he was studied for. Most kiwi mate for life.

Kiwi populations in Northland should be thriving. The unique Northland brown kiwi lays more eggs per year than other kiwi, and can start breeding at 3-4 years. Unfortunately, the life expectancy of Northland kiwi is only 14 years, compared to 45-60 years elsewhere. This is due to dogs. Keeping your dog away from kiwi and kiwi areas at all times is the best protection, and thanks to the Purua community who are doing just that.