A yellow-eyed penguin rescued from a Christchurch beach with a broken leg was mauled by a dog, prompting a call for owners to be more responsible on beaches.

A yellow-eyed penguin rescued from a Christchurch beach with a broken leg was mauled by a dog, prompting a call for owners to be more responsible on beaches. 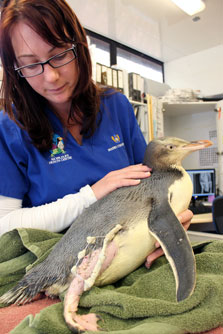 Department of Conservation ranger Anita Spencer was called out to South Shore last month to find a family standing guard in a circle around the injured juvenile penguin, to prevent unattended dogs getting closer.

“They had kept watch for at least 40 minutes before I arrived – they are heroes in my book,” says Spencer.

The penguin was taken to the Hornby Veterinary Centre and then sent to the Wildlife Health Centre at Massey University for an operation.

“The vets agree that the penguin was attacked by a dog – most likely picked up by its back leg and shaken. It had injuries on its back as well.”

Yellow-eyed penguins or hoiho nest in small numbers on Banks Peninsula, where local schools, landowners and the Banks Peninsula Conservation Trust, Christchurch City Council and DOC are doing predator-trapping to protect them.

“There are a lot of people working really hard to get penguin chicks to fledge, as the first stage of their life is usually the most dangerous time,” says Spencer.

“They spend their first few years after fledging exploring the wild, feeding and coming ashore to rest before they settle down to breed. To have this juvenile mauled by a dog on its first journey into the world is really disappointing and completely avoidable.”

“Even when dogs don’t catch the birds they’re chasing, they can still cause stress, which can lead birds to desert their eggs and chicks, or abandon an area altogether.

“It’s a serious offence for a dog to harass protected wildlife, with penalties including imprisonment for the owner and fines of up to $20,000 if wildlife is killed.”

The area where the penguin was found is prohibited to dogs under Council bylaws but they are allowed in the nearby dunes under effective voice control or on a lead.

The yellow-eyed penguin, named Titahi, has survived surgery to pin its broken leg. It faces several months of rehabilitation before it can be released back into the wild.