A donation of 3500 native plants by Newmont Waihi Gold is set to give a major boost to environmental restoration at the Athenree Wildlife Reserve this spring. 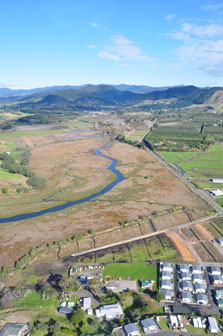 A donation of 3500 native plants by Newmont Waihi Gold is set to give a major boost to environmental restoration at the Athenree Wildlife Reserve this spring. A public planting event is being held on Sunday September 16th and organisers are hoping at least a hundred volunteers will descend on Athenree to help.

“We have a regular group of volunteers for this project, but we’ll definitely need some outside help with so many plants!” says Brian Hepenstall of the Waihi Beach Environment Society. “Department of Conservation are right behind the event and will be providing refreshments, so it’s an open invitation to put on some gumboots, bring a spade, and celebrate Conservation Week with some hands-on work. Or just come along and see what we’re up to, this is public land after all”.

The planting event starts at midday on Sunday September 16th and marks the end of Conservation Week, a national programme of events promoted by the Department of Conservation (DOC).

“We’re seeing some great success in restoring this retired farmland to natural habitat along the Waiau River at Athenree” says Dan Rapson, DOC’s Biodiversity Ranger in Tauranga. “Volunteers are needed to make this planting a success. The result of the work will be an increase in the amount of food and shelter available for birds, lizards and insects, and it’ll help to crowd out weeds like gorse and blackberry. Volunteers have already been trapping animal pests in the reserve, so it’s becoming a great place for rare native birds such as bittern and fernbird. It’s a great place to see what wild wetlands actually look like”.

The planting event is free and open to the public from 12pm to 3pm on Sunday September 16th. The reserve is located on Steele Road, the entrance is next to the Waiau River Bridge. Parking is available. Volunteers should bring gumboots and a decent spade if they have one – other spades will be available for those that don’t.