Two kiwi that were last seen and handled in 2007 and 2008 respectively were found while tracking Northland brown kiwi in the Purua Kiwi Sanctuary, Whangarei in January 2012.

While tracking Northland brown kiwi in the Purua Kiwi Sanctuary in January 2012, Pete and Rua found two kiwi, Matarakau and Salote. These kiwi were last seen and handled in 2007 and 2008 respectively.

Matarakau is a male who was first found as a juvenile in March 2002. The DOC Whangarei kiwi team tracked Matarakau from 2002 until 2006. In 2006, he was found with an egg, which he successfully hatched. Matarakau had his transmitter removed in January 2007. 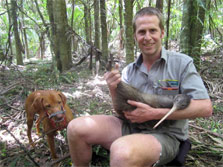 Salote is a feisty female who was first tagged as a chick in Purua in January 2000. Salote was tracked from 2000 until 2008 when she was last handled and had her transmitter changed. Her transmitter failed soon after this, and she had not been seen since.

This week Pete and Rua found these two kiwi together, cuddled up in a love nest. Both kiwi were in good condition and thriving in the habitat at Purua.

“It is amazing that both of these kiwi managed to live through the nightmare of 2008, when uncontrolled dogs killed at least seven kiwi within Purua. Dogs are the number one killer of kiwi in Northland, and almost all dog-kiwi encounters are fatal. The lack of a sternum makes kiwi especially vulnerable to dogs. Even dogs that don’t usually try to hunt can easily kill a kiwi by picking it up gently or giving it a playful nudge. I am hoping that finding these two together means there will be more little kiwi on the way, to help re-build this population,” says Pete Graham.

Within the protection of the Whangarei Kiwi Sanctuary the kiwi population is growing by about 9% per year - one of the highest levels of growth in the country. This is a great result for all the hard word that goes into protecting our local taonga. This population growth is due to responsible dog ownership (including keeping dogs away from areas that kiwi live at all times), kiwi aversion training, and on-going predator control.

Sadly, in areas where protection measures are not in place, the kiwi population is reducing. The life expectancy of Northland kiwi is only 14 years, compared to 45-60 years elsewhere. This is due to dogs.

“I would like to say a big thank you to all those people within our community who are contributing to the survival of Northland brown kiwi in the wild. It can be as little as tying your dog up at night, but it all helps. Salote and Matarakau are living proof of your excellent efforts,” says Mr Graham.

Purua is located northwest of Whangarei, and makes up part of the Whangarei Kiwi Sanctuary.