Dr Allen of Dunedin is the winner of the 2012 Loder Cup Award. Since the early 1970s, Dr Allen has been instrumental in establishing and administering several NGOs.

Dr Allen was instrumental in establishing the Otago Natural History Trust, of which he was a cofounder and chairman for a decade. He was the driving force behind the establishment of the Orokonui Ecosanctuary, 20 km north of Dunedin, near the village of Waitati. A predator proof fence has been established around 307 ha of native forest. This area is home to some of New Zealand's most fascinating and rare forest wildlife. Indigenous plants and animals can live in the wild without threat from most introduced pests. 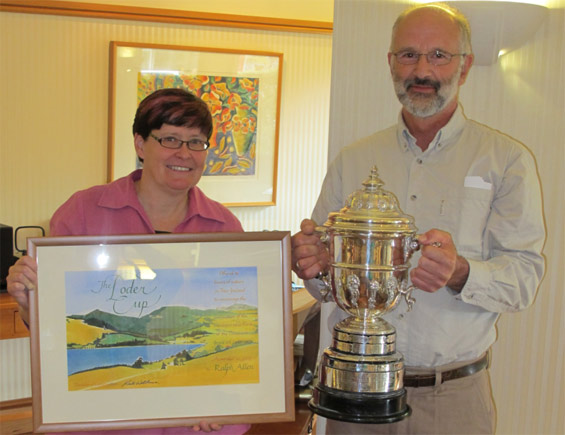 Dr Allen has led the planning, public advocacy, coordination agency liaison, and site planning for this new and innovative venture of native conservation. While initial support for this visionary project was limited, Dr Allen formed a small team that quietly and intentionally developed a business case, which was presented to the civic and business community. He also brought the Department of Conservation and Otago regional Council on board, as well as the initially reluctant Waitati community.

In less than a decade, Dr Allen managed to unify and direct efforts of different agencies and communities to establish what has become one of the most exciting and accessible biodiversity protection efforts in the South Island. While Dr Allen would be the first to acknowledge the efforts of others, it is clear that much of the success, acceptance and biodiversity outcomes can be attributed to Dr Allen's calm, clear, and persistent vision.

Dr Allen was awarded a QSM for conservation, particularly for his work on Orokonui Sanctuary, earlier this year.

Dr Allen was cofounder and Trustee of the Resource Monitor Trust, which was established to fund environmental research and advocacy and has supported projects such as the coastal pingao restoration by tangata whenua, and the protection of the Lower Waitaki River.

As a former member of the Dunedin City Council's Mt Watkin working group, Dr Allen's efforts resulted in the protection of 500 ha of the "best remaining example of dry coastal forest in Otago". The site also includes "nationally important volcanic boulder fields". Dr Allen first identified and reported on the rare and threatened native forest in eastern Otago back in 1986.

Burns Park Scenic Reserve, near Dunedin, surrounds 7 ha of native forest owned by Dr Allen. He ensured the protection, one of the first Protected Private Land covenants under the 1977 Reserves Act. The forest is managed in conjunction with the Scenic Reserve.

Dr Allen's professional work is wide ranging, he has expertise is in assessing the biological significance of vegetation and the selection of protected natural areas. The native vegetation of the Catlins, eastern and Central Otago is what Dr Allen has specialised in. He has also worked in most parts of Southland, Otago, Stewart Island, Fiordland, West Coast, Mackenzie Basin and North Canterbury.

In the late 1970s Dr Allen undertook and wrote Biological Survey of Reserves for Otago for Lands and Survey - still a standard reference. He subsequently coauthored a similar survey of Southland for the Department of Conservation.

He was the scientific advisor to the Protected Natural Areas Programme, a pilot programme, surveying the Central Otago high country.

Assessments of natural areas, in conjunction with the high country tenure review, were carried out by Dr Allen for Department of Conservation, various territorial authorities, as well as private landowners

He has written numerous management plans for protected areas, recovery plans for endangered species, and prepared an inventory of areas of significant conservation value in administrative regions, both in Canterbury and Dunedin.

Dr Allen was nominated by the Otago Conservation Board.