Chatham’s Island's Amanda Baird overcame considerable obstacles to help some of New Zealand’s rarest plants. She was the 2007 recipient of the Loder Cup. 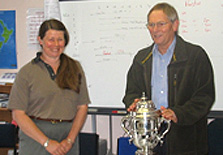 Amanda Baird with Al Morrison and
the Loder Cup

The Cup’s recipient is decided each year by the Minister of Conservation.  The Hon Steve Chadwick described Ms Baird’s achievement as outstanding. “Ms Baird is responsible for a total of 15% of New Zealand’s most vulnerable native plant species. Her efforts have resulted in huge gains in the protection of native flora of the Chatham Islands; referred to by some locals as ‘the threatened plant capital of New Zealand”.

A staggering 70,000 native seedlings have been planted in what is described as ‘one of the toughest restoration programme locations, logistically and environmentally, in New Zealand’.

Access to remote Mangere Island is via fishing boat, where Ms Baird and her team have spent weeks at a time in harsh conditions transforming a once grass-covered land into an emerging native forest.

Ms Baird has been directly involved in 19 Nature Heritage Fund projects to covenant a total of 2,071 hectares of private land with high conservation values on the Chatham’s and initial funding for the re-vegetation programme on Mangere Island Nature Reserve.

An achievement Ms Baird is particularly proud of was obtaining funding for fencing and ongoing maintenance of fences around the protected areas. “The environment is so corrosive that it’s an ongoing and costly battle keeping fences maintained.  However without them, the plants would never survive”.