Learn about the carnivorous weeds that can wreak havoc on New Zealand's native vegetation.

Carnivorous plants introduced from overseas have been found growing in the wild around Auckland, where they pose a threat to native plants. DOC and the Auckland Regional Council are investigating the distribution of these plants in parks around Auckland, especially at Whatipu within the Waitākere Ranges Regional Park.

We are seeking the help of people who visit these places to locate populations of introduced carnivorous plants. 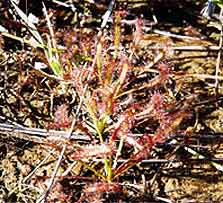 In particular, we are on the look out for two invasive South African plants: Cape sundew (Drosera capensis) and a bladderwort (Utricularia livida).

Both these plants are listed on the National Pest Plant Accord list. These two plants cannot be bought at plant retailers and should not be traded by carnivorous plant enthusiasts.

They have also been planted in the wild or accidentally introduced through soil contaminated by seeds with plantings of pitcher plants and water lilies etc.

They are now starting to spread of their own accord, possibly with help from water birds.

Cape sundew is a terrestrial, upright, tufted perennial plant. The numerous green leaves are up to 6.5 cm long and covered in sticky red hairs.

It is easily distinguished from New Zealand species by its dark pink flowers on long stems that can reach 35 cm in height.

Utricularia livida is a creeping terrestrial bladderwort that favours damp organic soils and clay pans. At Whatipu, U. livida is growing covered by shallow water. In the Waikato, the related Utricularia sandersonii is colonising wetland areas.

Both Utricularia species have broad spoon-shaped  green leaves up to 2.5 cm long that lie flat on the ground. They are most noticeable over summer when they send up 10 cm tall stems with mauve or whitish flowers. 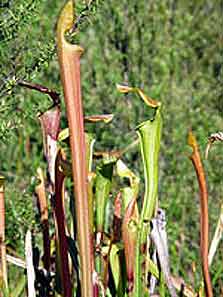 Several species of Sarracenia (pitcher plants) are also naturalising in sites of wet to damp clay throughout the country.

They have been planted in the wild from Northland to Taranaki and have begun to spread from these plantings.

Although these Sarracenia species are not likely to be very invasive, a major problem is that the seeds of other carnivorous plant species may be introduced with these plants through contaminated soil.

How you can help

DOC weed staff and regional council staff would like to hear from anyone who thinks they have seen these introduced carnivorous plants growing in the wild.

Forward any photos or location records to: