How an aerial 1080 predator control operation is run

We work to make sure operations are well-organised, safe and necessary through careful assessment, safety planning, community engagement and record keeping.

Step 1: Assessing when and where to run the operation

First, the site must be prioritised for predator control as part of a long-term regional conservation plan. Engaging in partnership with iwi, hapū and whanau is part of this process. We must begin planning 2-3 years before we can consider an aerial 1080 operation. View the criteria we use to decide on use of 1080.

Once confirmed, the timing of a 1080 operation depends on what animals are most at risk and when they are most vulnerable.

Some of our native species are more vulnerable to introduced predators than others. The ones in most danger of extinction are those that breed slowly, are long-lived and take a long time to reach maturity. Birds that nest in cavities in trees or the ground, and/or have long nesting times, such as kiwi, kea, mōhua, and kōkako are particularly at risk from predators.

We must then decide when it is the best time to use 1080. The timing might be because of:

DOC plans 1080 drop areas by finding what will provide the best protection for the taonga species. The area needs to be where the species can thrive and be large enough that predators don’t repopulate too quickly after control. We may also use ground control in part of the area or in adjacent treatment blocks to stop reinvasion.

To recommend treatment in an area, DOC reviews:

Once recommended, we show the planned drop on our pesticide summary map as a ‘proposed application’. We also list it on the Tiakina Ngā Manu operations page.

Once we’ve assessed an area, and 1080 has been agreed as the best control approach, we seek permission from the Public Health Unit to run an operation.

There are many conditions DOC must agree to and prove we’ve completed, including:

Once we have the permissions, we show the status of the area in the pesticide summary map as “pesticides will be laid”.

Once permission has been granted, we notify the Regional Council of the planned operation and where it will be occurring.

Then we wait for good weather. An on-call meteorologist helps decide timing. The weather can be very changeable, so the drop crew need to be ready at short notice.

When the weather is right DOC:

Before the 1080 operation, we help its success rate by carrying out at least one drop of non-toxic cereal baits. This is to get rats and possums used to eating them before dropping the toxic baits.

On the day, the team will assemble at the loading site(s) for a safety briefing before work begins.

‘Loading sites’ are the places where the trucks transporting the 1080 baits are unloaded. Here, we put the baits into special buckets. These are hung from the helicopter and set up to accurately spread pellets for the operation. 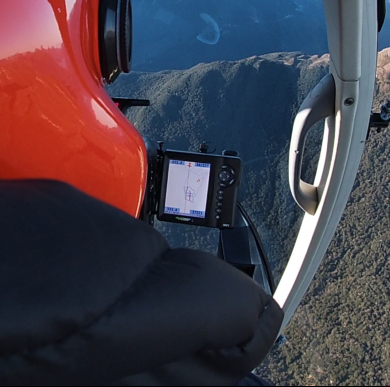 A pilot following a map with coordinates to apply bait

Once the helicopter pilot has completed all flight paths in the designated area, DOC staff may need to check tracks or other areas that the Public Health permission requires. They remove any individual baits they see on the tracks.

The helicopter has the coordinates of each drop programmed into its navigation system and measures are in place to ensure bait is applied only where intended. But, if an unexpected difficulty means bait may have been applied outside of the notified area, DOC’s geospatial analysts record it. Staff will then quickly recover the bait and report within 24 hrs to the:

After the drop, we monitor the reduction in  target predators and also the species that the operation aimed to protect.  We carry out rat and mice monitoring about 2-6 weeks after.

DOC places possum carcasses with cages over them within the area. The cages prevent wild animals eating the carcasses so we can monitor how long to they take to break down.

Only once possums have broken down almost completely is the area considered safe for dogs. Even a small amount of 1080 inside the stomach of a dead possum can kill a dog. So we maintain warning signs until risks to dogs have passed (up to 7 or 8 months). The PHU might extend this.

When the risk has passed, we remove the warning signs and update the pesticide summary so the area no longer shows on the map. You can find records of recent 1080 drops on the Tiakina Ngā Manu operations page.

We also send a post-operation report to the EPA within 6 months. These are then published on EPA's website.

Find out what it takes to plan and deliver a successful aerial 1080 predator control operation in one of the most remote parts of New Zealand.

We work to make sure our 1080 operations are well-organised, safe and necessary to protect native forests and species.

Proof 1080 is saving our species

Most of our unique endemic species live in hard to reach places. 1080 is the best tool currently available for large scale predator control in these places.

Pesticide summaries: where pesticides are used

Find out where pesticides are being used on public conservation land.