Information about 1080 and how to keep your dog safe.

Dogs are highly susceptible to 1080 poisoning. When they eat baits or poisoned rats, stoats or possums, the outcome is usually fatal.

This page provides information about the precautions in place, and how DOC and dog owners can work together to keep dogs safe during predator control operations.

The use of 1080 on public conservation land is highly regulated. We have a system for notifying the public of operations. 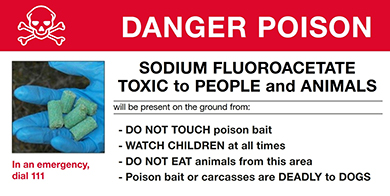 We install warning signs at track entrances. The signs stay in place until monitored poison residues and carcasses have disappeared.

We place alert messages on relevant DOC webpages so you can plan for your trip. To see if an area is safe for dogs to access, you can check the relevant track, hut, or hunting block page: Parks and recreation.

View all alerts and important notices

We engage with adjoining landowners ahead of an operation by visiting them to discuss the operation and how they may be affected.

We notify local hunting groups, concessionaires and other community groups that may be affected by an operation.

Information about all 1080 operations

The pesticides summaries interactive map shows all areas of public conservation land where pesticides have been used including 1080. It also tells you what restrictions are in place and when they have been lifted.

The National Predator Control Programme operations page shows which operations are planned for the upcoming year.

What you need to do to keep your dog safe

When dogs die from 1080, it’s usually because they’ve eaten poisoned carcasses rather than bait. As scavengers, dogs are at greater risk of 1080 poisoning than other domestic animals.

To keep dogs safe, they should be kept away from predator control areas until the poisoned carcasses have disintegrated. This usually takes four-to-eight months from when 1080 is distributed. We monitor the carcasses so we know when they have broken down and restrictions can be lifted.

Plan your trip and pay attention to warning signs

Make sure that dogs are allowed and check the rules for the area: Dogs on conservation land.

Before heading out, you can check the DOC website to see if the area you want to visit has any current 1080 operations. Alert messages for 1080 operations will be placed on relevant pages.

We install warning signs at track entrances to let you know when poison has been laid in an area and it is not safe for dogs. It is important to pay attention to these signs so that you don’t put your dog at risk. The signs stay up until all poison residues and carcasses have disappeared and it is safe for dogs to enter the area again.

Use a muzzle and short lead

If it’s not possible to avoid an area that may contain bait or carcasses, consider muzzling your dog or use a short lead to prevent it scavenging.

There is a small chance that poisoned predator carcasses may be washed downstream from an operation and onto riverbanks, river mouths or beaches. It is advisable to keep your dog muzzled or on a lead in these areas to ensure they cannot scavenge.

There are actions that hunters can take to keep their dogs safe.

Check before you go hunting with dogs

Before you go hunting on public conservation land, you can check whether the area has had any toxins laid using the pesticide summaries map.

It is not safe to take hunting dogs to an area where 1080 has been recently used. Restrictions could be in place for four-to-eight months after 1080 is distributed.

More about hunting with dogs

Dogs in areas next to a 1080 operation

People live and work in areas next to public conservation land where a 1080 operation may occur.

Ahead of an operation, DOC consults with landowners and occupiers of properties adjacent to the operational area. This includes a conversation about mitigating risks to dogs.

People with dogs (including farmers) in or near an operational area can take the following precautions:

Preventing exposure is the best way to avoid a problem. If a dog does eat and ingest 1080, it takes between 30 minutes and several hours for symptoms to begin to show.

Death can occur between two and 12 hours after ingestion, so it’s important to act very quickly.

Symptoms of poisoning in dogs

Symptoms to look out for include behaviour changes such as disorientation, restlessness, hyperactivity, aggression, running in circles, barking or howling for no reason, and sensitivity to touch.

If you suspect a dog has eaten or chewed on 1080 bait or carcasses, take the following steps immediately:

Induce vomiting by putting one or two crystals of washing powder (sodium carbonate, available from the supermarket) down the dog’s throat. You can also use dog emetic pills or a teaspoon of table salt.

2. Quickly get the dog to a vet

Treatment may be possible if you can get the dog to a vet very quickly. Call ahead to let them know you are on the way and advise that you think your dog has 1080 poisoning. Dogs can sometimes be saved if early action is taken, but there is no antidote to 1080.