Native to Australia, plague skinks were first recorded in Auckland during the 1960s and are now posing a threat to our rare native lizards.

The plague skink (Lampropholis delicata) is sometimes known as rainbow skink. They look do look very similar to native skinks but are smaller.

Plague skinks are able to reach high population densities in a relatively short time. Because of this they potentially compete with our native lizard species for food, habitat and space.

Plague skinks are found in the North Island from Northland to Waikato and the Bay of Plenty, with outlying populations at:

Plague skinks are also in the South Island in two locations:

Where they came from

Plague skinks were first recorded in Auckland during the 1960s, probably arriving accidentally in cargo. 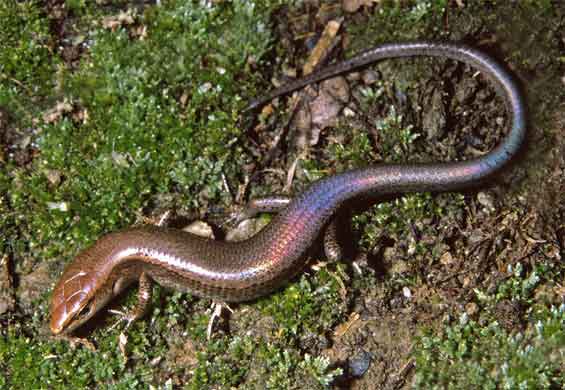 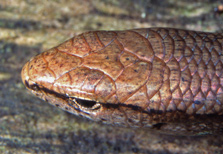 Plague skinks are native to Australia. They are small lizards, measuring about 3-4 cm long from nose to hind legs excluding the long thin tail. The skink is brown or grey-brown with a dark brown stripe down each side, and an iridescent rainbow or metallic sheen when seen in bright light.

Although the adults are smaller than native skinks, they look very similar but can be easily distinguished with one distinctive feature.

Plague skinks have one large scale on the top of their head, whereas New Zealand native skinks have two smaller scales.

Plague skinks reproduce rapidly – laying up to eight eggs three times per year (more than five times as fast as most native lizards) and mature in less than half the time of native lizards. They can reach high population densities in a relatively short time, competing with native lizards and other native fauna for food and habitat, and and increasing predation pressure on native invertebrates.

By comparison, most New Zealand skinks are long lived and only breed once per year at most. Some don’t even start breeding until they are around five years old. 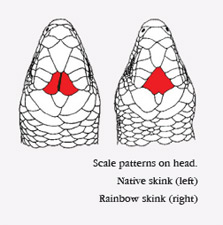 Plague skinks are prolific breeders, and you may find communal nests of 20-100 small white eggs, 8-10 mm long, oval in shape, with a tough leathery shell. It is common for them to lay their eggs in the soil of potted plants.

Why they are a threat

Plague skinks are invasive pests that pose a threat to our rare native lizards. Plague skinks have already invaded other countries, for example Hawaii, where their impact has resulted in the serious decline of native skink species there.

Many of New Zealand’s approximately 35 native skink species are in decline, or, in some cases, have become locally extinct through introduced predators such as rats, cats, mustelids and hedgehogs. Plague skinks are yet another threat to our declining native lizard populations, by competing directly for food and habitat.

As the natural range of the plague skink includes the temperate climate of Tasmania they are well equipped to survive and spread throughout New Zealand and its offshore islands. Climate modelling suggests they would easily be able to establish in the South Island. DOC has worked closely with MPI Biosecurity New Zealand to declare plague skinks an Unwanted Organism. It is illegal to knowingly communicate (move); release, or cause to be released; spread; sell, or offer for sale; exhibit; or breed plague skinks without the explicit permission of MPI Biosecurity.

DOC is monitoring the distribution of plague skinks, and raising public awareness of how to limit the spread of this invasive species.

DOC undertakes surveillance of significant reserves and offshore islands to prevent them from entering these sites, many of which provide a safe haven for our rare and threatened native lizards.

If you live in an area that has plague skinks, and wish to relocate any equipment, goods, or other freight to an area that is free of this species; thoroughly check your personal belongings for plague skinks before departure.

Potting mix in potted plants is a favoured breeding habitat. Check these for any of the small white eggs, especially if plants are to be used in restoration projects, such as on off-shore islands or key ecosystems on the mainland.

Also, inform your neighbours and friends of the presence of plague skinks on your property and their threats and impacts.

Together we can prevent the plague skink from spreading.

If possible, take a photo to help with obtaining the correct identification.

There are many different types of lizards in the world. In New Zealand we only have geckos and skinks.