Lakes and streams are teeming with life but most of these organisms cannot be seen with the naked eye.

Lakes and streams are teeming with life but most of these organisms cannot be seen with the naked eye.

If you haul a very fine-meshed net through the water, tip your catch into a jar and hold it up to the light, you may see some of the larger species of zooplankton swimming jerkily up and down. To see more, such as the incredible complexity of their eyes, limbs and hearts, you will need to use a microscope.

Zooplankton are organisms that have animal-like traits. The biggest are only five millimetres long and the smallest are just one thousandth of this size. They float, drift or weakly swim in the water. In fact, the name plankton comes from the Greek word ‘planktos’ which means ‘wanderer’ or ‘drifter’.

Zooplankton encompass a wide range of both unicellular and multicellular animals. While most zooplankton are ‘heterotrophs’ – that is they obtain their energy from consuming organic compounds, such as algae or other zooplankton - some zooplankton, such as the dinoflagellates, may also be fully or partially photosynthetic - gaining their energy, as plants do, from sunlight.

The design and symmetry found in this aqueous world is beautiful and enthralling.

Where are freshwater zooplankton found?

Freshwater zooplankton are found in the water in wetland areas such as lakes, tarns, streams and swamps. They are most abundant nearer the surface as they eat phytoplankton (microscopic plants) which need light to photosynthesise.

Many species move into shallower waters at night. Avoidance of UV and/or predators and metabolic advantages are some of the possible reasons for this phenomenon.

Most plankton are too small to see with the naked eye, but their beautiful shapes are revealed under the microscope.

Dominant among the larger organisms are Cladocerans which swim by rowing with their large antennae in a series of jerks. They are covered by a transparent shell (bivalve carapace) which has to be shed periodically for them to grow bigger. Bosmina are abundant in most lakes.

Daphnia pulex, a recently introduced species, is much larger than any of our native Cladocerans. It can reach five millimetres in length and may be seen with the naked eye.

Why are zooplankton important?

Herbivorous zooplankton graze on phytoplankton or algae, and help maintain the natural balance of algae. 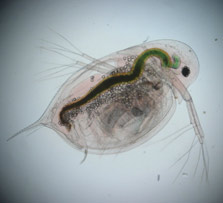 Variations in water quality such as changes in nutrient levels, conductivity, temperature or pH, can lead to changes in species composition and abundance.

Temporary drying out or freezing of water bodies or increases in water temperature,  present challenging conditions for zooplankton. Often it is only the resting egg stages that survive these periods.

Exotic invading species, such as Daphnia pulex, may out-compete native species, which could result in irreversible changes in food webs.

How you can help

Get out and enjoy local lakes and freshwater ecosystems. Get involved in their protection by joining a community group or alerting others to the weird and wonderful native species that live in New Zealand’s wetlands.

Our freshwater habitats range from glaciers in the mountains, to lowland rivers and streams that flow into estuaries.

Wetlands are areas where water is the primary factor controlling the environment and associated plant and animal life.