Corals are actually invertebrate animals and most are protected.

Corals are invertebrate animals belonging to the phylum Cnidaria (from the Greek word 'Cnidos' meaning stinging nettle). There are five main classes of Cnidaria:

Species referred to as corals occur within the Anthozoa and Hydrozoa classes. They can exist as individuals or in colonies. Many secrete calcium carbonate external skeletons.

The Coral Identification Guide covers the key coral groups found in the New Zealand region. It's mainly intended by observers on board commercial fishing boats.

Most corals are absolutely protected under Wildlife Act 1953. Specifically, they are:

It is illegal to deliberately collect or damage these species. All protected corals accidentally brought to the surface (eg on or in fishing gear, or fouled by anchors) must be immediately returned to the sea.

Many corals are listed on Appendix II of the Convention on International Trade in Endangered Species (CITES). These species may not be imported or brought into New Zealand without an export permit from the country of origin. DOC is the New Zealand CITES authority.

They take their name from the bright coloration and textured surface. Often referred to as the ‘Kauri of the deep’, they are among the largest and most ecologically important benthic sessile deep-water organisms, harbouring hundreds of associates.

Seventeen species occur throughout the New Zealand Exclusive Economic Zone, with six of these likely to be endemic.

Distribution is patchy with hotspots around seamounts and ridges. In preliminary work at NIWA samples of a large bubblegum coral were aged using a radiocarbon dating method. The colony tip of this coral was dated 100-200 years old and the base at least 300-500 years old. 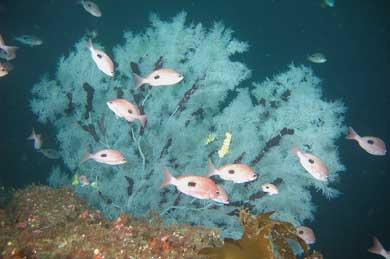 Black corals belong to the order Antipatharia within the Anthozoa. They are named for the dark colour of their hard proteinaceous skeletons.

When alive the skeleton is covered by living tissue and bears tiny polyps. The tissue covering the skeleton can be variously coloured. Consequently living black coral colonies do not look black eg Antipathes fiordensis typically appears white when alive.

Colonies of black coral can look like trees, whips, fans or feathers. Some species may live for hundreds of years, and may grow over 3 m tall.

About 58 black coral species are known in New Zealand waters and most appear to live at a depth of 200-1000 m. Divers are most likely to encounter black corals below 40 m depth on offshore reefs in northern New Zealand.

In Fiordland and parts of Port Pegasus, Stewart Island, Antipathes fiordensis may occur as shallow as 10 m depth. Several subtropical species are found on shallow reefs at the Kermadec Islands.

Trawling and dredging adversely affect deepwater corals and coral habitats. Recovery from this type of disturbance is likely to take decades and possibly hundreds of years due to the very slow growth rates of deepwater species.

Increased marine sedimentation caused by catchment development can also damage coral larvae and smother settlement surfaces as well as established colonies. Several species of snake star can be found living commensally on the branches of black corals. These play an important role in cleaning the colony and preventing them being overgrown by other organisms.

You can help maintain healthy coral communities by

We often think of corals as some sort of plant, or as inanimate rocks or stones, but coral are in fact animals — amazing animals at that.