We asked for your say on the now approved dual naming for Puhi Kai Iti/Cook Landing National Historic Reserve. Submissions closed on 17 June 2019.

Pursuant to the New Zealand Geographic Board Act 2008, DOC gave notice of a dual naming proposal for Cook Landing National Historic Reserve at Gisborne. We advised of the new dual name and sought submissions to support or object to it before 17 June 2019. 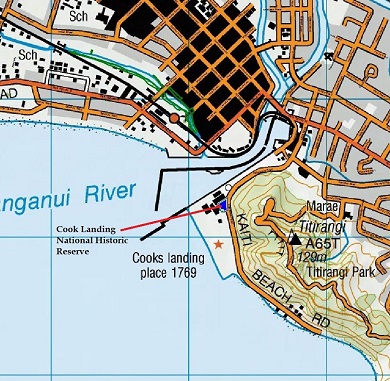 Why did we propose a dual name?

The dual naming coincides with the 250th anniversary of Captain Cook's arrival in New Zealand on 6 October 1769 and is to acknowledge our bicultural heritage.

Puhi Kai Iti was one the puhi (feathered streamers) from the taurapa sternpost of the great ocean waka Te Ikaroa-ā-Rauru after its journey from Hawaiki. It was a mauri that connected Aotearoa to Hawaiki.

It carried the whare wānanga teachings and knowledge of Hawaiki and was laid to rest on shore at what was then to be known as Puhi Kai Iti.

How did the public have their say?

What is happening now?

Any new signs, maps brochures and written material will contain the dual name.

The memorial site is also being given a facelift through a joint initiative by the Council, DOC and Ngati One One. This is to be ready for the 250th anniversary celebration of Captain Cook's arrival in October.

Puhi Kai Iti commemorates the first landing place of James Cook in New Zealand in 1769. It also commemorates the Horouta and Te Ikaroa-a-Rauru waka (canoes) which carried Māori to the district.