An evaluation of the costs of pest wasps in New Zealand

2015
This study assessed the economic impact of German wasps and common wasps across industries, society and the natural environment in New Zealand.

An evaluation of the costs of pest wasps (Vespula species) in New Zealand (PDF, 1,280K) 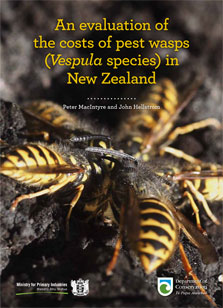 This assessment was based on a literature review. Information was collected from previous studies and from affected sectors in New Zealand to estimate the total costs of wasps, ie the costs that could be avoided and the opportunities that could be gained if wasps were not present in New Zealand.

New Zealand has some of the highest densities of German and common wasps in the world. Wasps have huge social and biological impacts; they are one of the most damaging invertebrate pests in New Zealand, harming our native birds and insects.

This study found that wasps also have a major financial impact on primary industries and the health sector. This includes:

Jointly funded by the Department of Conservation and the Ministry for Primary Industries.

New Zealand has some of the highest densities of German and common wasps in the world. They can now be controlled using Vespex, a targeted wasp bait.

Vespex is a targeted wasp bait that can be purchased from Merchento by approved users.